In the past few days I haven’t seen much of the outside world, with the exception of a quick Walmart run for dog treats and a stop at Culver’s for a butterburger and frozen custard. (To all the Hawaii natives: Culver’s is a chain that serves delicious, made-to-order burgers between buns that are apparently cooked in butter. And the best part? No calories! Wink, wink.)

I think being cooped up is prolonging my jet lag. I’m still sleeping at 2 a.m. and waking up around 10 a.m. It’s not helping my appetite, either—for some reason, I don’t feel hungry and have to remind myself to eat. Back home, if I was stuck inside all day, I’d take Koa for a walk or run just to get out. Unfortunately, he’s still in the “do my business and run back into the house” mode; I can’t get him to stay out in the snow for more than five minutes.

So, when my friend told me she was going outside to get the snow off and away from her car, I said I’d help her. After being indoors for several days and not really engaging in any physical activity, I figured I could use some exercise—even if shoveling snow in the freezing cold wouldn’t exactly be my activity of choice. But after about an hour of talking story, scooping and scraping, the ice and snow were off her car and the driveway was cleared. And you know what? It wasn’t that hard. 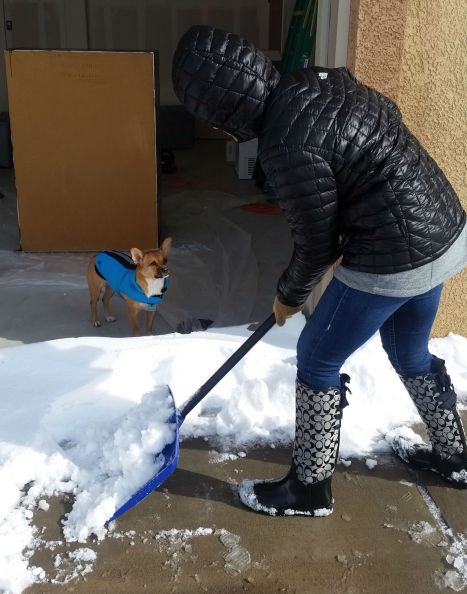 I don’t understand women who refuse to do it, insisting their fathers or husbands do it for them. True, people have dropped dead doing this winter chore (as with any physical activity, older or out-of-shape people should be cautious…), but I agree with Mollie Ziegler Hemingway, senior editor at The Federalist. We need to close up the snow-shoveling gender gap, people! If this snow newbie from Hawaii can shovel a driveway full of snow, anyone can. So to all the healthy, able-bodied, non-pregnant women out there in this white winter: Get a grip, get out, and grab a damn shovel!